Some people are just born hospitable. Hospitality is defined as “the friendly and generous reception and entertainment of guests, visitors or strangers.” If you have encountered Kyle Davis, there is no doubt you would say that he embodies that definition. Kyle began his career with The St. Joe Company eight years ago as the general manager of Fish Out of Water®, WaterColor® Inn & Resort’s most notable restaurant. His attention to detail, love of employees, guest-focused philosophy and affable personality have paved the way for his career to continue to blossom since then.

Even at the early age of 12, he was working behind the concession stand at little league baseball games in his hometown of New Port Richey, Florida. “I was always thrilled to be able to serve people. Even at 12, I didn’t look at filling soda cups, popping corn or handing over a hot dog as a job,” he says. It was a mission.

Kyle attended the University of Central Florida where he earned his hospitality management degree at the Rosen College of Hospitality Management. Even before graduating, he joined the Hilton corporation and was part of the opening team for the Orlando Hilton Hotel attached to the Orlando Convention Center. “It was there that I got my first opportunity to work in food and beverage,” says Davis. “That taught me just how important it is to create a positive guest experience.”

After a few years, he landed a senior position at the Umstead Hotel and Spa, a five-star, five-diamond hotel in North Carolina. It was then that members of The St. Joe Company reached out to Davis and recruited him to join the team at WaterColor Inn & Resort as manager of Fish Out of Water. In the ensuing years, he advanced to Assistant Director of Food and Beverage, then Director of Lodging and Guest Experience before being promoted to General Manager of Watersound® Inn and Watersound® Beach Club in 2021. “This is a blending of everything I learned in hospitality school. In overseeing these properties, I get to interact with every department, which has been amazing. My leadership style is quite simple; I want to be informed about every detail. I am definitely a ‘hands-on’ manager,” says Davis. Apparently, the staff appreciates this about him as employees describe him as being empathetic, understanding and most of all, respectful. “The true test for me with our staff is to see them smiling and enjoying their contribution to the guest experience,” he says.

The transition to WaterSound Inn and Watersound Beach Club was not your typical changing of roles. Davis started his new role at the beginning of 2020, and by March, COVID had become a household word. Watersound Beach Club closed for 45 days. However, during that period, leadership decided that the Club would offer its Members complimentary takeout meals twice a week. It was an overwhelming success and became something for Members and staff to look forward to each week. When the Beach Club reopened, it was with new health and safety regulations in place, and it was with many new Watersound Club Members. It seems that as people realized that life must go on despite the pandemic, many opted to relocate so that they could spend more time living their life by the beach, and many of those already in the area began to look for new ways to enjoy quality time with family and friends. Where others might have been daunted by the task, Davis and his team at Watersound Club rose to meet the occasion. “We seized the opportunity to enhance our training program. Staff not only implemented the new safety protocols, but prepared to enhance the guest experience, making them feel incredibly good about their visit to the Club.”

Davis’ strategy is to focus on that Member and guest experience. As he leaves each day, he takes a few minutes to reflect on the events that had unfolded. “If I know that even the most trying of circumstances was resolved to a Member or guest’s liking, I feel that we have done the job,” he says. “I realize that our Members have a choice in Club experiences. My job is to make sure that Watersound Club is the right choice.”

Davis and his wife, Summer, have three children. Their eldest son, Styles, is a junior at FSU, and their daughter, Madilyn, is in sixth grade at Emerald Coast Middle School. Their youngest son, Grady, is in the fifth grade and attends Dune Lakes Elementary. 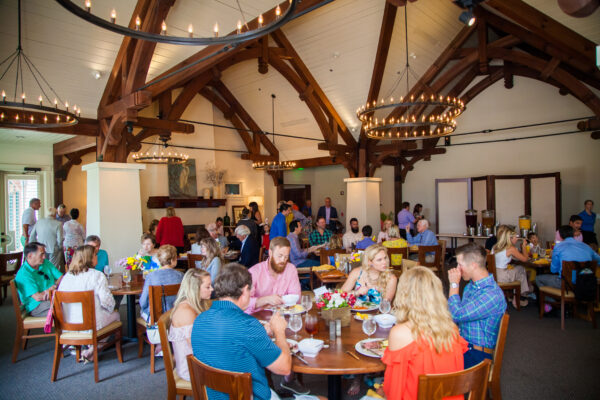