The Heart of Watersound Club Cuisine Chef Preetam Pardeshi has been a staple for The St. Joe Company for nearly 10 years, ever since he moved to the area for a position at WaterColor Inn’s Fish Out of Water restaurant in 2013.

Pardeshi has achieved several promotions within The St. Joe Company, quickly moving up in his role at Fish Out of Water to become the chef of cuisine and then the executive sous chef. He later made the move from WaterColor Inn to the Watersound Club team, becoming the executive chef at Beach Club and, more recently, working on the development of the Club’s future Camp Creek Inn restaurants and the adjacent Club amenities where he’ll serve as executive chef upon their openings.

But Pardeshi’s experience reaches further back than his time with St. Joe. He has always felt connected to food and the art of cuisine, even from a young age, growing up around his grandparents who were farmers. Originally from Pune, India, an area known as the “Oxford of the East,” Pardeshi was lucky in the fact that educational opportunities were plentiful, and he was able to take advantage.

Pardeshi was classically trained in styles including Italian, French and Indian cuisine. But he learned the nuances of Southern-style cuisine at the Grand Hotel Resort in Fairhope, Alabama.

As an internationally trained chef, Pardeshi could have landed anywhere, but the Gulf of Mexico called to him, and it’s still his favorite part of living along the Emerald Coast. Now he calls the area home, having purchased a house in 2018 and settled into his role with the Watersound Club team.

Pardeshi’s day-to-day role is eclectic as he moves between Club amenities, depending on where he is most needed on any given day. But his role will soon evolve again with the opening of the Club’s three new dining venues in the new year: 1936, ANR and Bark N’ Brine. The addition of these dining venues to the Watersound Club portfolio will equally be an addition to Pardeshi’s plate, as he is set to oversee all three. Having already accomplished so much, Pardeshi is ready and excited for what lies ahead.

“I don’t see hurdles, I see challenges,” he said. “From my perspective, unless you have those challenges, you cannot become better. There is no excitement if there is no challenge.”

1936, named after the founding year of The St. Joe Company, will be an all-day casual dining option serving breakfast, lunch and dinner. Perfect for a quick bite before tee time, to take a break from the sun or to bring the family for dinner, 1936 will be located at Camp Creek Inn

ANR, named for the historical Apalachicola Northern Railroad of the Forgotten Coast, will offer Members an upscale dining experience with a Southern flair. Pardeshi is looking forward to this elevated dining addition, saying that “ANR will offer an atmosphere of personalized service to our Members. It will be a complete experience.”

Bark N’ Brine will be a familyfriendly poolside dining venue with indoor and outdoor seating, offering smokehouse favorites along with health-conscious options. Nestled between the new Wellness Center and the resort-style pool area, Bark N’ Brine will be perfect for Members stopping by in between dips in the water or a class at the Wellness Center for a fast, yet quality meal.

Pardeshi’s goal, aligning with that of the Watersound Club experience as a whole, is to offer Members a spectrum of dining experiences so that everything they could possibly want is available to them without having to venture off Club property. He doesn’t want Members to go to just any 30A restaurant.

“I want them to come to mine,” Pardeshi said. “Our membership is growing, and my primary focus is to have a variety of options for the Members to enjoy different varieties within the Club.”

For now, Pardeshi spends most of his time at the Watersound Beach Club dining venues, where even on a slow day they serve around 500 people. On a busy day? Upward of 1,500 people. Hardly a one-man show, Pardeshi is grateful for the support of his team members and staff, especially on busy days.

“Without those teams, I’m nobody,” said Pardeshi. “I give all credit for my success to the teams I’ve worked with. They deserve more appreciation and credit for their hard work and efforts. Without them, I cannot do what I do.”

Pardeshi takes pride in supporting employees and helping them advance in their roles, just as he was able to do himself. 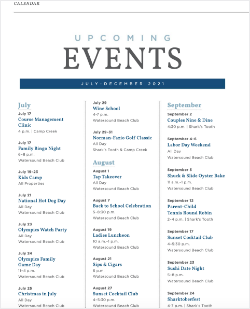