In October 2018, Hurricane Michael ravaged the Florida Panhandle as a Category 5 hurricane with winds as high as 162 mph. Panama City Beach suffered some of the worst of Michael’s damage.

The St. Joe Company’s Bay Point Marina was no exception. The long-standing community boating hub was left in complete destruction.

But St. Joe wouldn’t let the marina’s destruction be its end, instead taking the opportunity to rebuild, reimagine and rebrand the place that many boat owners have called home for decades.

Now known as Point South Marina at Bay Point, newly rebranded under the Point South Marina umbrella, this long-time favorite home for boaters has gone through several phases of reopening throughout the summer and is now fully open to the public.

“Being under The St. Joe Company umbrella, people will know that they can expect a consistent level of excellence across the board,” said Justin Bannerman, marina director for Point South Marina at Bay Point. “When you see ‘Point South Marina,’ you’ll know that you’re getting top of the line.”

“We want our marina guests to receive the same Southern hospitality they’ve come to expect at our other properties,” said Preston Sutter, marina director for Point South Marina at Port St. Joe. “Branding a string of marinas across the Panhandle will allow transient boaters to pull up to any of our marinas and know they will be met with courtesy and enthusiasm at each stop by our friendly and energetic staff.”

Bannerman believes that the rebuild of Point South Marina at Bay Point will eventually lead to greater success in the storied marina’s future.

“It gave us an opportunity to redesign the marina to accommodate much bigger boats and to fix some of the flaws that the original marina had grown into,” he said, explaining that older marinas couldn’t cater to larger modern boats in terms of width, as boats weren’t built as wide up through the ‘80s.

While the old marina had 180 slips, now Point South Marina at Bay Point has 127 larger slips that better accommodate modern boat designs. In this case, less is certainly more as this improvement makes for easier maneuvering and a better dock experience.

“That’s probably the biggest benefit of the redesign and the rebuild — these boats and these captains don’t have to stress,” said Bannerman.

A less visible improvement, but just as essential: the new in-slip waste pump-out feature. “At the old marina, when your holding tank is full, if you’ve got to do the inevitable chore that nobody wants to do, you’d have to pull over to the fuel dock to empty your holding tank,” Bannerman explained. “Now we have in-slip pump outs. The dockhands can do that for you. You don’t even have to be here. You just tell us you need it done as you leave on a Sunday, and when you come back on Monday, it’s emptied for you.”

Bannerman said they also have an extended fuel dock that can accommodate six boats, a covered fish cleaning and display facility and state-of-the-art shore power with safety measures to help protect boat owners.

Among new amenities are a new swimming pool, laundry facilities, complimentary coffee, morning newspaper delivery, utilities and high-speed Wi-Fi. An amenities fee is rolled into one yearly fee, making it convenient for members to pay once and be done, rather than managing various fees or a monthly utility bill.

The Ship Store offers easy access to cold beer, drinks and ice, as well as Point South Marina merchandise and popular retail items from brands like Yeti, Toadfish and more.

Point South Marina at Bay Point is also home to Freedom Boat Club, a separate entity that offers boat rentals through membership. If all that is not enough, there’s also the nearby Serenity Spa — for ultimate relaxing and pampering within a short walk of the marina.

Bannerman, new to the area by way of Charleston, South Carolina, had heard of the longstanding reputation of Bay Point Marina as a community pillar and a welcoming place for boaters from all over, but he is now learning just how special the marina is to the community.

Through the phases of reopening he’s found that the community spirit and bonhomie “has absolutely remained the same.” He noted that “this marina means so much to the Panhandle, and more specifically to Panama City Beach. People have spent 20, 30 years here prior to the storm and couldn’t wait to come back.”

“I kept hearing people say that they were coming home, and that is not something you hear at a lot of marinas. You walk the docks right now, and it’s like they never left.”

The marina celebrated this sense of community by welcoming a group of the most prestigious run of boats, known as the “front row,” as part of the first phase of reopening. This celebration, a parade of sorts, was staged out in the open water and captains returning to their home marina radioed to Bannerman to ceremoniously request permission to enter the channel. This fleet of returning marina members was a perfect way to celebrate the reopening of Point South Marina at Bay Point. With emotion showing in their voices and faces, it was more than a reopening for marina staff and the captains and crew, it was a warm welcome home.

When asked about goals for the future of the newly reopened marina, Bannerman said, “fill it up, for one,” but also that he hopes to “continue the community feeling that is already in place and grow with that.”

As for the growth of the Point South Marina umbrella, the rebuild at Port St. Joe will open in phases, similar to its sister location at Bay Point, and is planning an official reopening later this year.

“We are anxiously awaiting the opportunity to help you create memories with your family and friends on the water!” said Sutter. 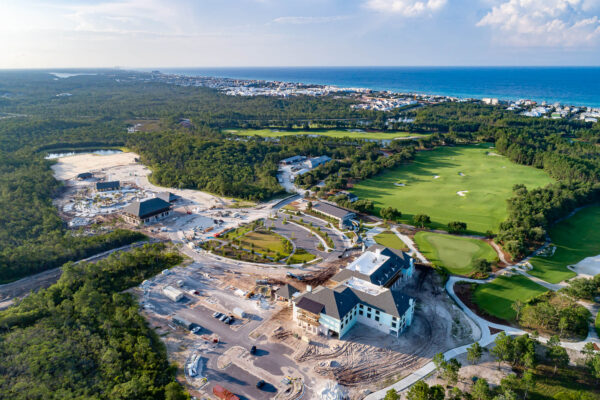